Pipeline to the Future: Succession and Performance Planning for Small Business, a new book by Stephen Drotter and John B. Prescott, AC, has been released by Dorrance Publishing Co., Inc. Small businesses have a huge challenge to perpetuate themselves. Based on 80 years of experience this book guides them in preparing for their likely future.… 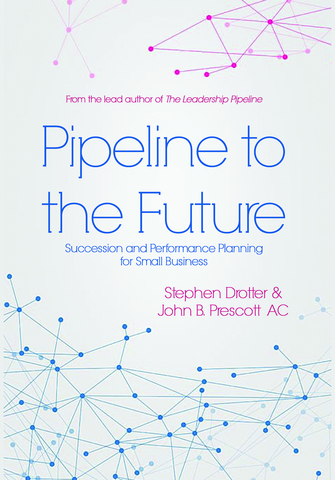 Pipeline to the Future: Succession and Performance Planning for Small Business, a new book by Stephen Drotter and John B. Prescott, AC, has been released by Dorrance Publishing Co., Inc.

Small businesses have a huge challenge to perpetuate themselves. Based on 80 years of experience this book guides them in preparing for their likely future. It explains how to: plan for succession at all levels, strengthen the organization structure for business growth, improve leadership performance, build the right leadership team, and select and develop the best people for every position. Guiding principles with examples based on real life experience make this advice clear and easy to apply for leaders of small businesses.

Stephen Drotter is Chairman of the Leadership Pipeline Institute, which is dedicated to advancing the knowledge of and practices for developing leaders for current and future positions at all levels of an organization. For almost 50 years, Drotter has been working with succession and leadership development as an internal leader of the work and as an executive consultant with businesses, big and small, around the world. He started Drotter Human Resources in 1985 and focused on succession, organization, executive assessment, and leadership development to share what he had learned. He has served over 100 companies on five continents in 37 countries.

John B. Prescott AC is an Australian business executive with wide international experience. His initial career was in human resources/ industrial relations but transitioned to business leadership when he became head of BHP Transport, then BHP Steel, and later MD and CEO of the parent company. Prescott was chairman of the Australian Manufacturing Council, and the Victorian Government’s Workcover Authority’s Best Practice Health and Safety Program for industry. He was Deputy Chairman of the Business Council of Australia, and an advisor to the Australian Government on defense, as well as a member of that Government’s Remuneration Tribunal.

He held several international positions, where he made major contributions at senior management and board level to strategy, policy, human resource selection and development safety. Mr. Prescott holds a degree in Commerce (Industrial Relations) from the University of New South Wales (UNSW). His awards include a Companion in the Order of Australia (AC), an Australian Centenary Medal, an Honorary Doctor of Laws from Monash University, and an Honorary Doctor of Science from UNSW. He is a Fellow of the Australian Academy of Technology and Engineering, Institute of Company Directors and the Australian Institute of Management.

Pipeline to the Future: Succession and Performance Planning for Small Business is a 170-page hardcover with a retail price of $26.00 (eBook $21.00). The ISBN is 978-1-6491-3247-5. It was published by Dorrance Publishing Co., Inc of Pittsburgh, Pennsylvania. For members of the press, to request a review copy, visit our virtual pressroom at http://dorrancepressroom.com or to buy the book visit our online bookstore at https://bookstore.dorrancepublishing.com/pipeline-to-the-future-succession-and-performance-planning-for-small-business/

OnePlus is making a Harry Potter Edition of its Watch

‘Tent City’: Anger over eviction of the homeless living in Green Point