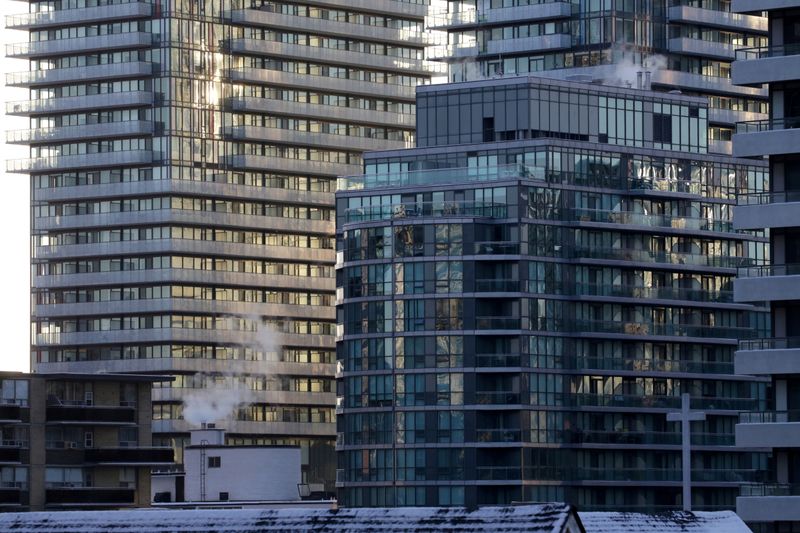 TORONTO (Reuters) – Condominium markets in some of Canada’s biggest cities have rebounded strongly this year, and agents and analysts say the market could once again return to pre-pandemic red-hot conditions as rental demand surges and inventories evaporate.

The condo market, which had been hot for years, cooled quickly last year during the pandemic as investors fled, spooked by the exodus of renters from cities to live with families or find cheaper places elsewhere.

Short-term rental demand dried up and first-time buyers flocked to the suburbs and smaller towns to work from home.

This year, the rental market is rebounding on the prospect of white-collar employees and students returning to offices and universities and a strong bounce back in immigration to make up for pandemic-driven declines. Younger buyers are also returning to condos after prices for bigger homes surged during the pandemic.

In the second quarter, the downtown market made up the highest proportion of greater Toronto area condo resales in a decade, which “speaks to a renewed level of confidence, not only in the condo market generally, but more specifically in the downtown market,” Hildebrand said.

About 12,700 condos sold across the greater Toronto area from January to April, surpassing the 10,300 transactions ahead of the previous market peak in 2017. And while they fell following a March high, they remained 15% higher than pre-pandemic levels.

Across Vancouver, where condo sales previously peaked in March 2016 at more than 2,250, they rose to almost 2,700 in March. Sales in July, while down from March, were 36% above pre-pandemic levels.

Prices have pulled back from March highs, largely due to continued lockdowns in some areas and seasonal trends, raising concerns in some quarters that the market has peaked. But real estate agents said a tightening rental market should boost investor demand, giving the market another leg up.

“As people see stability, that will draw in more investors over time,” he said.

Nasma Ali, founder of One Group Toronto Real Estate, said a lease listing she had in April saw little interest in the first two weeks.

“The third week, we started having tons of showings,” she said.

Then, she said, around mid-July, with vaccinations progressing, lockdowns winding down, and a return to offices and in-person learning anticipated, the rental market heated up again, with multiple offers, and landlords achieving rents above asking rates.

The jump in demand has helped rapidly absorb last year’s glut of rental properties. Rental supplies in Toronto have fallen to half a month of inventories from about three months’ worth in November, said Realosophy Realty President John Pasalis.

He said demand might get another lift as people who moved to outer suburbs have second thoughts as they are summoned back to downtown offices.

“Even with a hybrid (work) model, it will be hard for a lot of people who bought two hours out the city,” he said. “I wouldn’t be surprised if some people say ‘I made a mistake,’ and want to move back to the city.”

Shrinking available supply is further boosting the condo sales market. Construction started on about 1,143 apartment and condo units in June in the Toronto metropolitan area, down over a third from a year ago and almost half the level of two years ago.

And while ongoing construction of condos was at a record 86,149 units in the second quarter, about 92% of this was already pre-sold. The pullback in demand last year, combined with a dearth of land downtown, has dampened the launch of new projects, Hildebrand said.

“Developers are somewhat reactionary,” he said. “Now that demand for downtown condos has returned, we will see more condos launching.”

Reports Of Cheating At Colleges Soar During The Pandemic

Earning More on Cryptocurrencies? We’ll Tell You How!

Could residential heat pumps be part of the climate solution?

How Migraines Protect Against Type 2 Diabetes