Please try another search Economy45 minutes ago (Aug 20, 2021 08:06PM ET) © Reuters. FILE PHOTO: Signs lay on the ground after people gathered outside of an apartment complex with the intention to stop the alleged eviction of one of the tenants in Mount Rainier, MD, U.S., August 10, 2020. REUTERS/Leah Millis By Jan Wolfe… 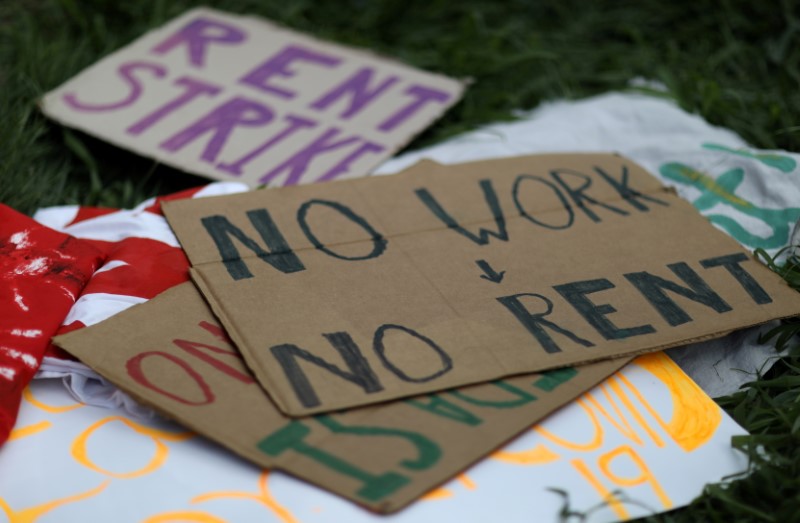 © Reuters. FILE PHOTO: Signs lay on the ground after people gathered outside of an apartment complex with the intention to stop the alleged eviction of one of the tenants in Mount Rainier, MD, U.S., August 10, 2020. REUTERS/Leah Millis

By Jan Wolfe and David Shepardson

In a written order, the U.S. Court of Appeals for the District of Columbia Circuit denied an emergency request by two chapters of the National Association of Realtors to stop the COVID-19 pandemic-related eviction ban set by the U.S. Centers for Disease Control and Prevention (CDC). The moratorium, implemented after a previous one lapsed at the end of July, is due to expire on Oct. 3.

Realtor groups in Alabama and Georgia were among those challenging the moratorium.

The appellate court’s order sets the stage for the Supreme Court to hear arguments over whether the administration overstepped its authority by issuing the moratorium.

Hours after the order issued, the realtor groups asked the Supreme Court to issue an emergency order lifting the moratorium, saying in a court filing that “Congress never gave the CDC the staggering amount of power it claims.”

White House Press Secretary Jen Psaki said in a statement that the Biden administration is “pleased that the circuit court joined the district court in leaving the moratorium in place that is keeping hard-pressed Americans in their homes in areas of substantial or high COVID-19 spread.”

The current moratorium covers nearly 92% of U.S. counties, but that could change based on COVID-19 conditions.

The CDC first issued a moratorium in September 2020 after a prior one approved by Congress expired, with agency officials saying the policy was needed to combat the spread of COVID-19 and prevent homelessness during the pandemic.

By Ann Saphir and Howard Schneider (Reuters) – The Federal Reserve Bank of Kansas City said on Friday its annual economic symposium in Jackson Hole, Wyoming, will take place on…

Wall Street Week Ahead: Investors stick to stocks, but gear up for bumpier ride
By Reuters – Aug 20, 2021

By Saqib Iqbal Ahmed NEW YORK (Reuters) – Investors are preparing for a rockier ride ahead for markets, as worries over slowing growth, a looming rollback of the Federal Reserve’s…

Adele And Her Rumored Boyfriend Rich Paul Have Dinner

Ferocious storms to erupt across the central United States

Is the new Saints Row a reboot?

Deep in the forest, Germany fights another virus. This one hits pigs.

Michael Jackson Once Pitched a Collaboration With Duran Duran

Alleged blackmailing journo back in court