Please try another search Economy42 minutes ago (Aug 18, 2021 06:11AM ET) © Reuters. FILE PHOTO: Federal Reserve Board building is pictured in Washington, U.S., March 19, 2019. REUTERS/Leah Millis By Howard Schneider WASHINGTON (Reuters) – Insight into the Federal Reserve’s debate over when to end its pandemic-era emergency programs and the level of concern… 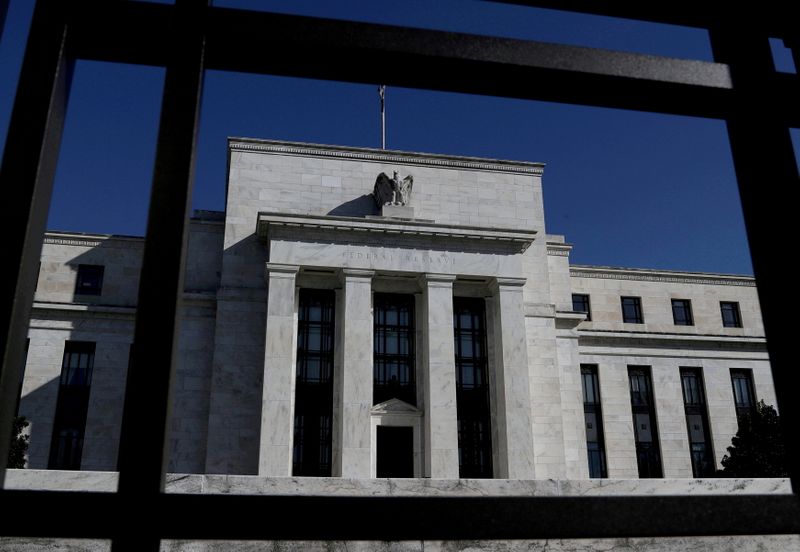 WASHINGTON (Reuters) – Insight into the Federal Reserve’s debate over when to end its pandemic-era emergency programs and the level of concern among officials over a spike in inflation should emerge on Wednesday with the release of a readout of the U.S. central bank’s policy meeting last month.

The minutes of the July 27-28 meeting, which are due to be released at 2 p.m. EDT (1800 GMT), will cover a session at which the Fed said it still had faith in the U.S. economic recovery even as the Delta variant of the coronavirus was fueling a troubling rise in cases. Officials also continued laying plans for the eventual end of the central bank’s $120 billion in monthly purchases of Treasury bonds and mortgage-backed securities (MBS).

Although the health crisis has intensified in the past three weeks, the economic recovery remains largely on track. U.S. job growth was strong through July and inflation remained well above the Fed’s 2% target – so much so that some central bank policymakers have since urged a quick end to emergency programs that they argue have outlived their usefulness.

Analysts expect the Fed to announce its plan for a “taper” of its asset purchases as early as the Sept. 21-22 meeting of the policy-setting Federal Open Market Committee (FOMC), with less certainty about how fast the actually reduction in the bond-buying program will proceed.

A “uniquely uneven economic recovery has led to a splintering within the (FOMC)” among those who feel the purchases should be reduced soon and ended fast, and those who feel the Fed should be patient until the job market recovers more fully, wrote Kathy Bostjancic, chief U.S. financial economist for Oxford Economics.

Demand is outstripping the ability of global supply chains and labor markets to keep pace and driving inflation higher, prompting officials like St. Louis Fed President James Bullard to argue the bond purchases should end soon so the central bank can raise its benchmark overnight interest rate from the current near-zero level if needed. Fed officials want the bond-buying program completed before any hike in borrowing costs.

On the other hand, “dovish committee members believe (quantitative easing) should continue until greater clarity is garnered on the prospective pace of inflation and until the recovery in the labor market” is more complete, Bostjancic wrote.

Graphic: The jobs hole facing Biden and the Fed , https://graphics.reuters.com/USA-ECONOMY/JOBS/jbyprzlrqpe/chart.png

The Fed at its last meeting acknowledged that progress had been made in recovering the jobs lost to the pandemic. The minutes may offer further clues on how much more progress must be made to clear the benchmark the Fed has established for reducing its asset purchases, and whether another month or two of strong employment gains would be enough.

The Fed said in December that it would not reduce those purchases until there had been “substantial further progress” in the jobs recovery. At that point, the economy was around 10 million jobs shy of where it was before the pandemic. Employers have added 4.3 million jobs since then, including a total of nearly 1.9 million jobs in June and July, a pace some analysts expect to continue into the fall.

The minutes may also reflect the early stages of discussion about another consequential Fed decision: When to raise interest rates.

Though that is unlikely to occur anytime soon, several Fed officials have noted since the July meeting that one of the key tests for doing so is already on the verge of being met, with inflation by some measures approaching a multi-year average at the Fed’s 2% target, and likely to stay there.

Atlanta Fed President Raphael Bostic said last week that he felt the central bank needed to begin discussing in more detail how it intends to apply a new framework that allows periods of higher inflation to offset periods of weaker price increases. The terms of any “overshoot” have never been specified, and some policymakers are beginning to argue that the pace of price hikes this year is adequate.

The Fed’s preferred measure of prices, the personal consumption expenditures (PCE) index excluding food and energy costs, rose at a 3.5% annual rate in June, its quickest pace in nearly 30 years. July’s reading is due late next week.

Trump asks if Rand Paul has ‘learned lesson’ on endorsements

Michael Wu of PROS: Even Though We Have Big Data, There’s Never Enough Data

Yes, You Can Work in the Restaurant Industry and Have Cute Nails