An Israeli military court decided Thursday to immediately release pregnant Palestinian security prisoner Anhar al-Deek to house arrest on around $12,500 bail. Al-Deek’s case featured prominently in Palestinian media, as she was set to give birth in jail. The last Palestinian prisoner to give birth while in custody was Gaza resident Fatima al-Ziq in 2008.…

Al-Deek, 25, was charged by Israeli military prosecutors for threatening to stab Israeli settlers at the illegal outpost of Sdeh Ephraim, which lies outside the Palestinian town of Ras Karkar in the central West Bank.

Her defense says that she suffers from a history of mental illness and was psychologically incapacitated during the incident.

According to Thursday’s court ruling, al-Deek will be under 24-hour supervision while staying at her mother’s house. She will also have to appear at an Israeli police station once a week and undergo psychological treatment, among other conditions.

According to military prosecutors, Al-Deek broke into Sdeh Ephraim’s farmhouse, grabbed a knife from the kitchen, and sought to attack one of the farm’s owners, Leah Ze’ev, who called her husband on the phone for help. 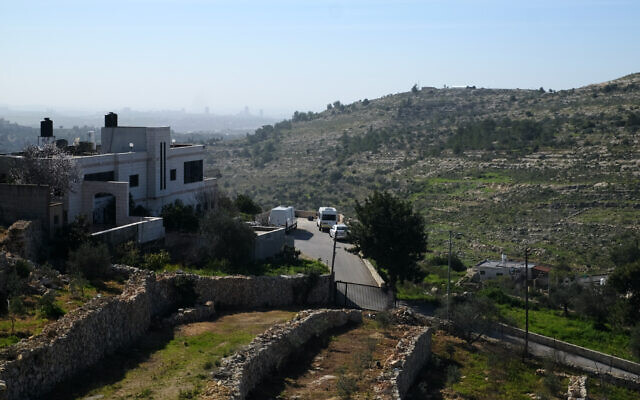 The view of the Sdeh Efraim Farm outpost from the West Bank village of Ras Karkar on February 11, 2021. (Judah Ari Gross/Times of Israel)

Ze’ev’s two daughters, aged eight and one years old, were at home at the time. The eight-year-old daughter fled the scene as al-Deek picked up a ten-centimeter-long knife, according to the indictment.

Al-Deek “waved [the knife] as she approached the victim, who had backed away and called for help,” the indictment said.

Ze’ev fled the house with her one-year-old daughter and slammed the door on al-Deek, who continued to wave the knife at her from inside. Around then, Ze’ev’s husband Eitan arrived with his brother and subdued al-Deek at gunpoint, according to the indictment.

As soon as al-Deek saw their weapons, she threw down the knife, and they held her until Israeli forces arrived on the scene, prosecutors said.

Al-Deek was arrested on March 8  and charged with aggravated assault and possession of a knife. An Israeli military judge ordered her to remain in jail until the end of the proceedings against her.

Al-Deek was already pregnant at the time of her arrest. As she has neared her due date in jail, her story has swamped Palestinian social media. The hashtag “Save Anhar al-Deek” trended in Arabic multiple times, and articles about her have been disseminated widely in Arabic-language media. 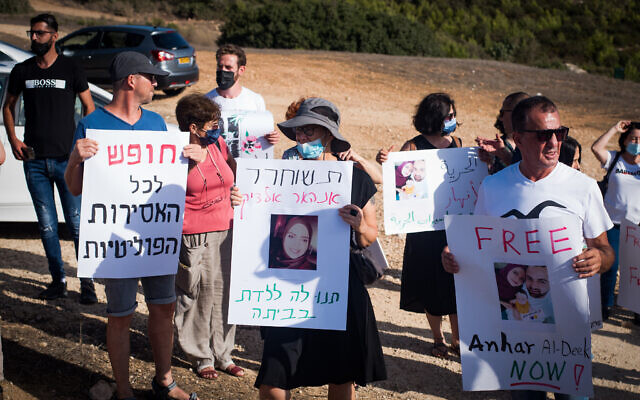 The incident was not the first violent encounter between the Ze’ev family and local Palestinians. The establishment of the Sdeh Ephraim outpost near Ras Karkar in 2017 occasioned protests — some of them violent — by Palestinian residents.

Sdeh Eprahim’s owner Eitan Ze’ev has also been on trial over the past year and a half for alleged wrongful shooting of multiple Palestinians on a farm near Nablus in July 2020. Ze’ev’s gun was confiscated as part of the proceedings against him.

Another alleged terror attack took place at the farm in February 2021, when a young Palestinian accountant Khalid Maher Nofal was shot and killed by Ze’ev in murky circumstances in the dead of night. According to the Israel Defense Forces, Nofal sought to break into the farmhouse, calling out “Allahu Akbar,” leading to a fatal struggle with Ze’ev that left him dead.

Based on Ze’ev’s testimony, the IDF quickly announced the incident was terrorism. But it also acknowledged that Nofal had arrived at the hilltop unarmed.

Times of Israel staff contributed to this report.

33 New and Returning Shows to Watch This Fall

106 COVID-19 infections reported in dormitories in first half of August; most cases were vaccinated

Poll: How do you think the State should fix issues with accessing childcare?

Being fully vaccinated halves the risk of getting long COVID after infection, large UK study suggests