Official posters have been released for SBS’s upcoming drama “Lovers of the Red Sky”! Based on the novel of the same name by author Jung Eun Gwol, whose novels “Sungkyunkwan Scandal” and “The Moon Embracing the Sun” have also famously been adapted into hit dramas, “Lovers of the Red Sky” is a historical fantasy romance drama set…

Official posters have been released for SBS’s upcoming drama “Lovers of the Red Sky”!

Based on the novel of the same name by author Jung Eun Gwol, whose novels “Sungkyunkwan Scandal” and “The Moon Embracing the Sun” have also famously been adapted into hit dramas, “Lovers of the Red Sky” is a historical fantasy romance drama set in the Joseon era.

Kim Yoo Jung will star as Hong Chun Gi, the Joseon dynasty’s only female painter who was born blind but miraculously regains vision. Ahn Hyo Seop will star as blind astrologer Ha Ram, who is able to read the stars despite losing his sight, and Gong Myung will star as the romantic and lonely Prince Yangmyung. Kwak Si Yang will play the cruel and ambitious Prince Joohyang.

The lead actors look straight out of a picture book in the group poster and individual character posters. 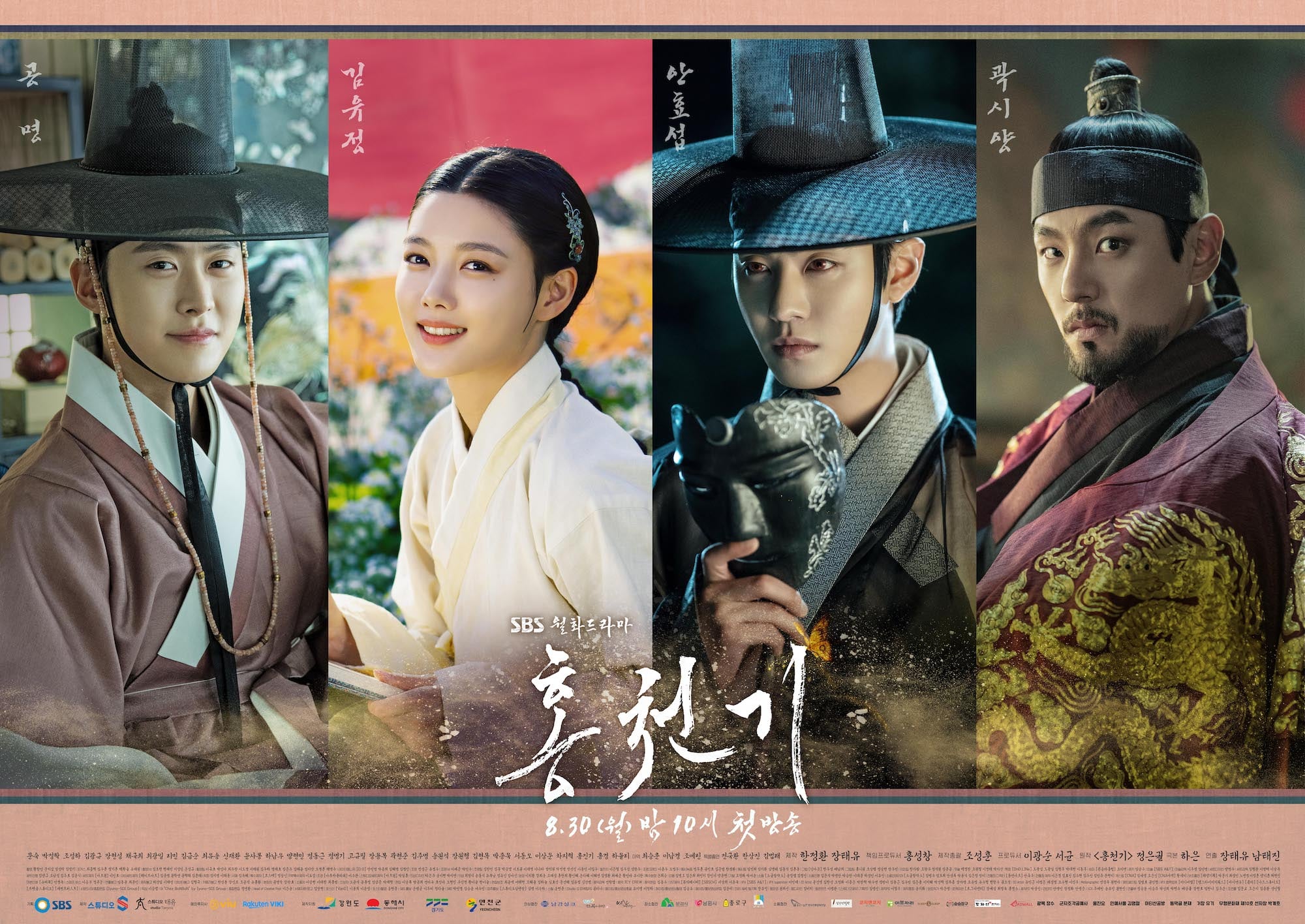 In the role of the genius painter Hong Chun Gi, Kim Yoo Jung looks like a bold and progressive young woman with a pure passion for painting. The yellow poster reads, “I want to paint you. Even those sorrow-filled eyes,” while the pink poster says, “I will paint you, even if I lose my two eyes. For you, scholar.” Anticipation runs high for Kim Yoo Jung’s return to acting in a historical drama and the romantic story she will paint as Hong Chun Gi. 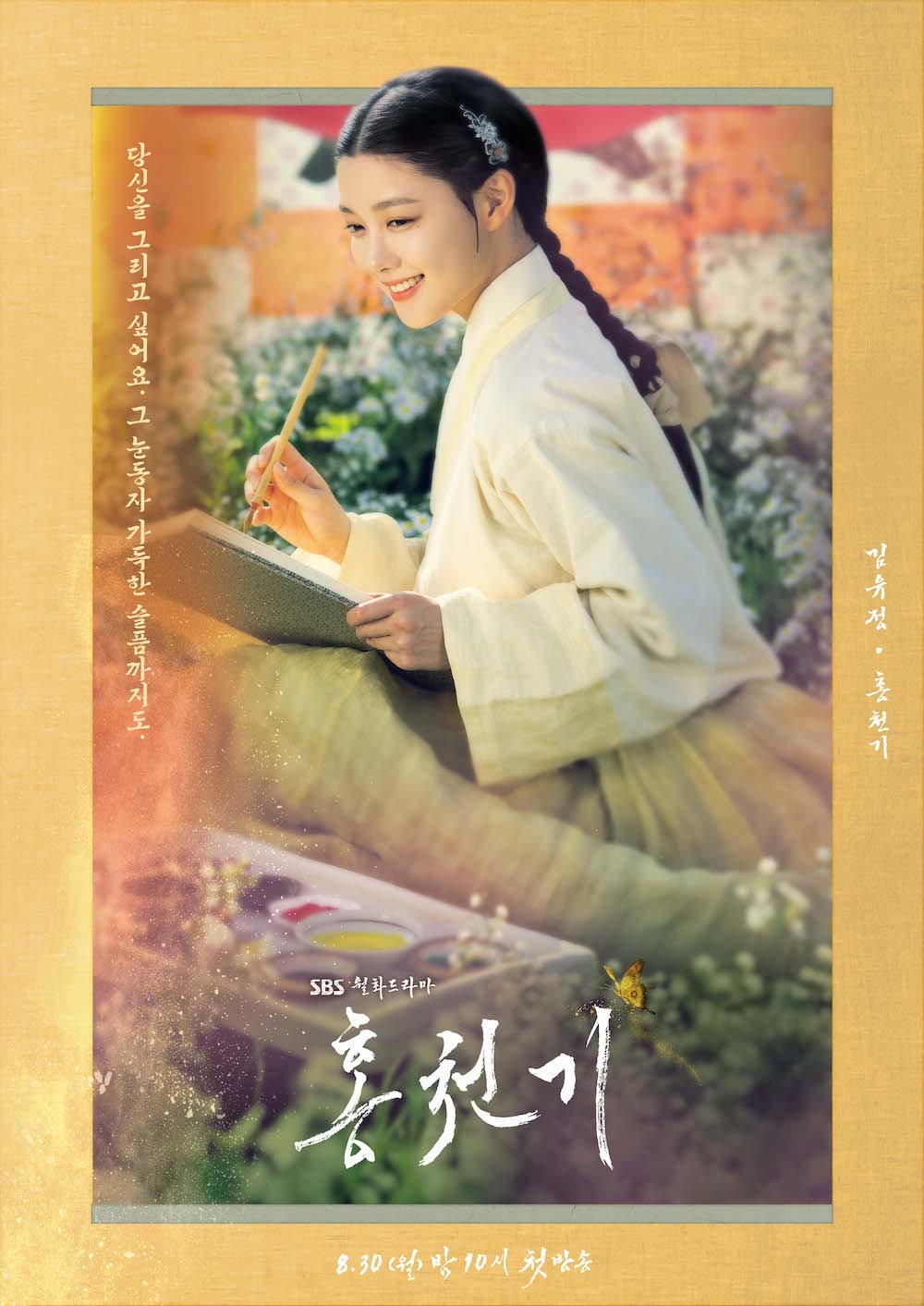 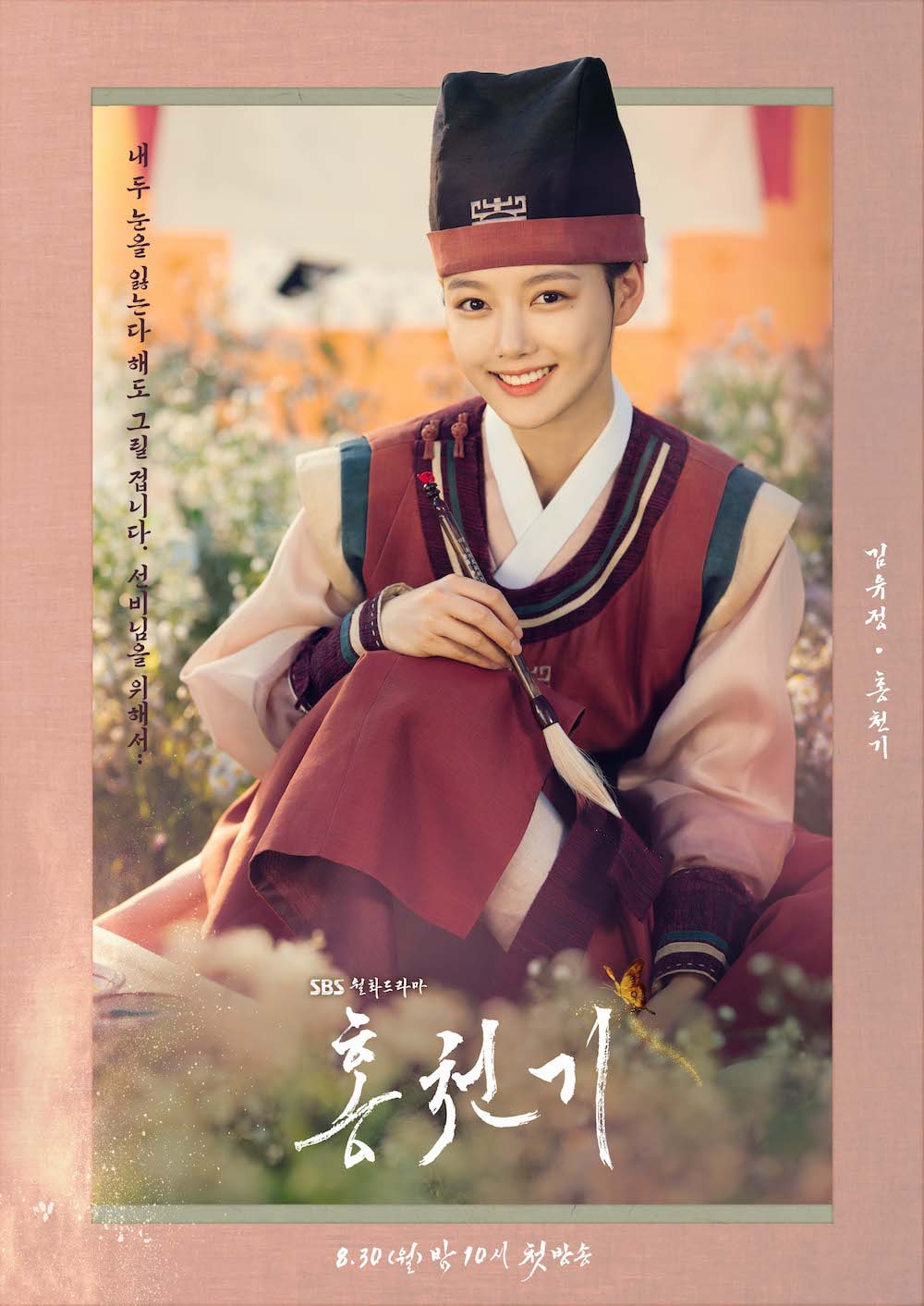 Ahn Hyo Seop will stand at the center of the drama’s stormy plot as the red-eyed Ha Ram. By day, he works as an astrologer, and by night, he lives as Il Wol Sung, the head of the intelligence organization Wol Sung Dang. In the poster, the darkness surrounds him and makes his shining red eyes appear more pronounced. On the green poster, the text reads, “Even though I can’t see, I can feel it if it’s you. Like the stars in the night sky.” However, the blue poster conveys a more sinister message, as it says, “Something indwelling me is going after you. Run. Far away from me.” 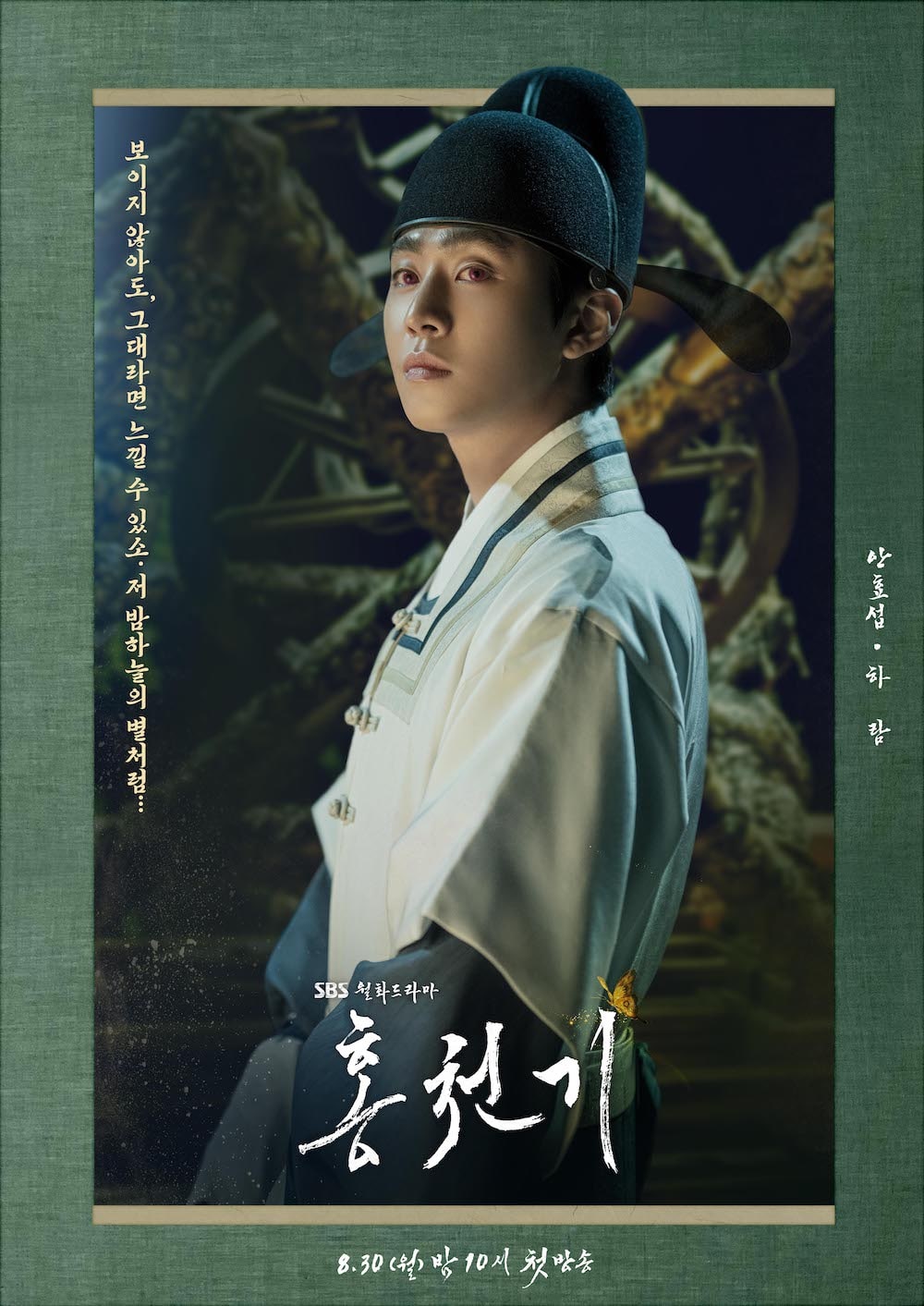 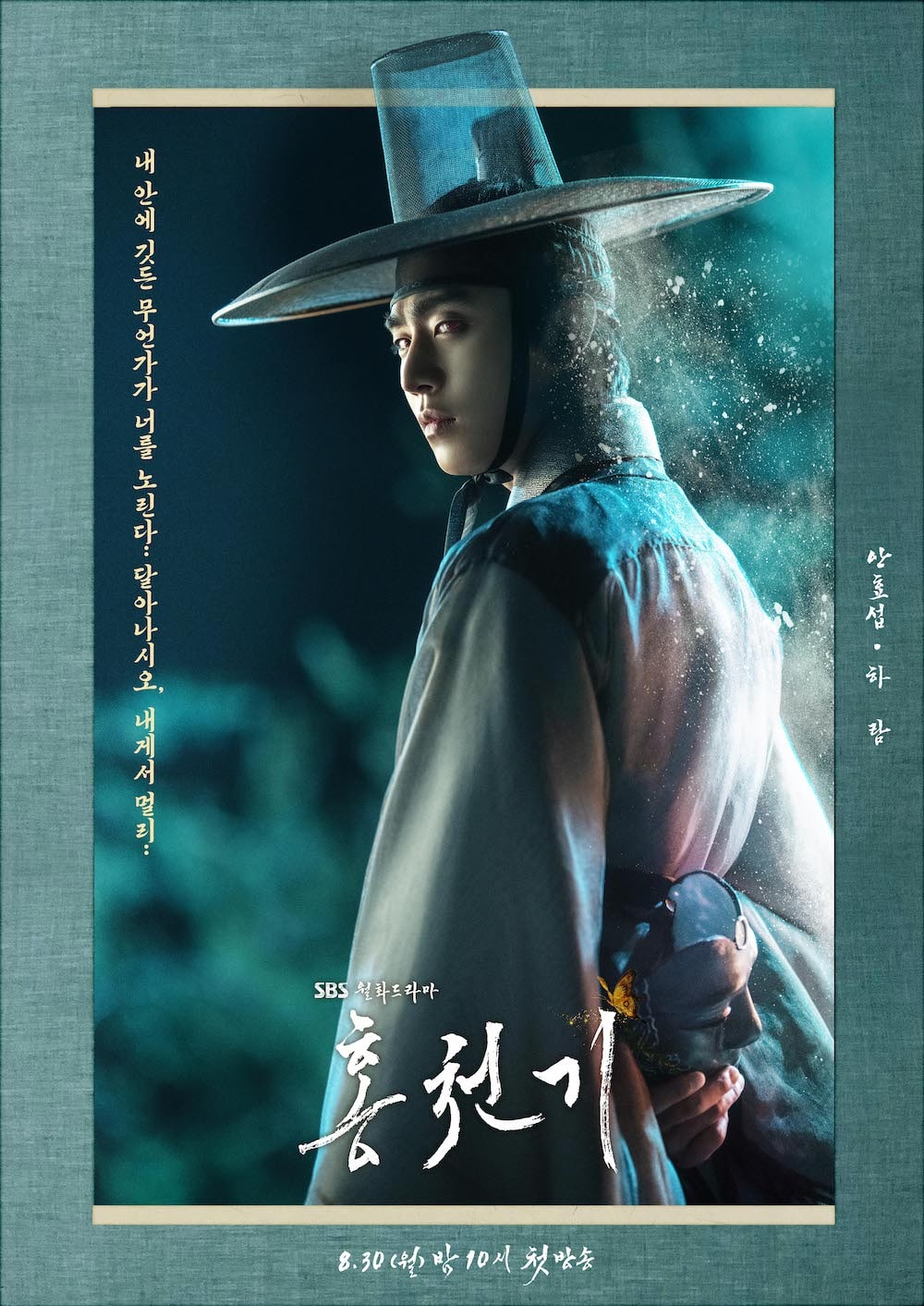 Gong Myung plays the romantic Prince Yangmyung who enjoys the arts. His room is filled with scrolls of poetry and paintings, reflecting his love of poetry, calligraphy, and painting. Though he appears to have everything anyone could have, there is a certain loneliness in his heart that Hong Chun Gi fills when she enters his life. His poster reads, “Now, I want to protect you. Your paintings and you.” 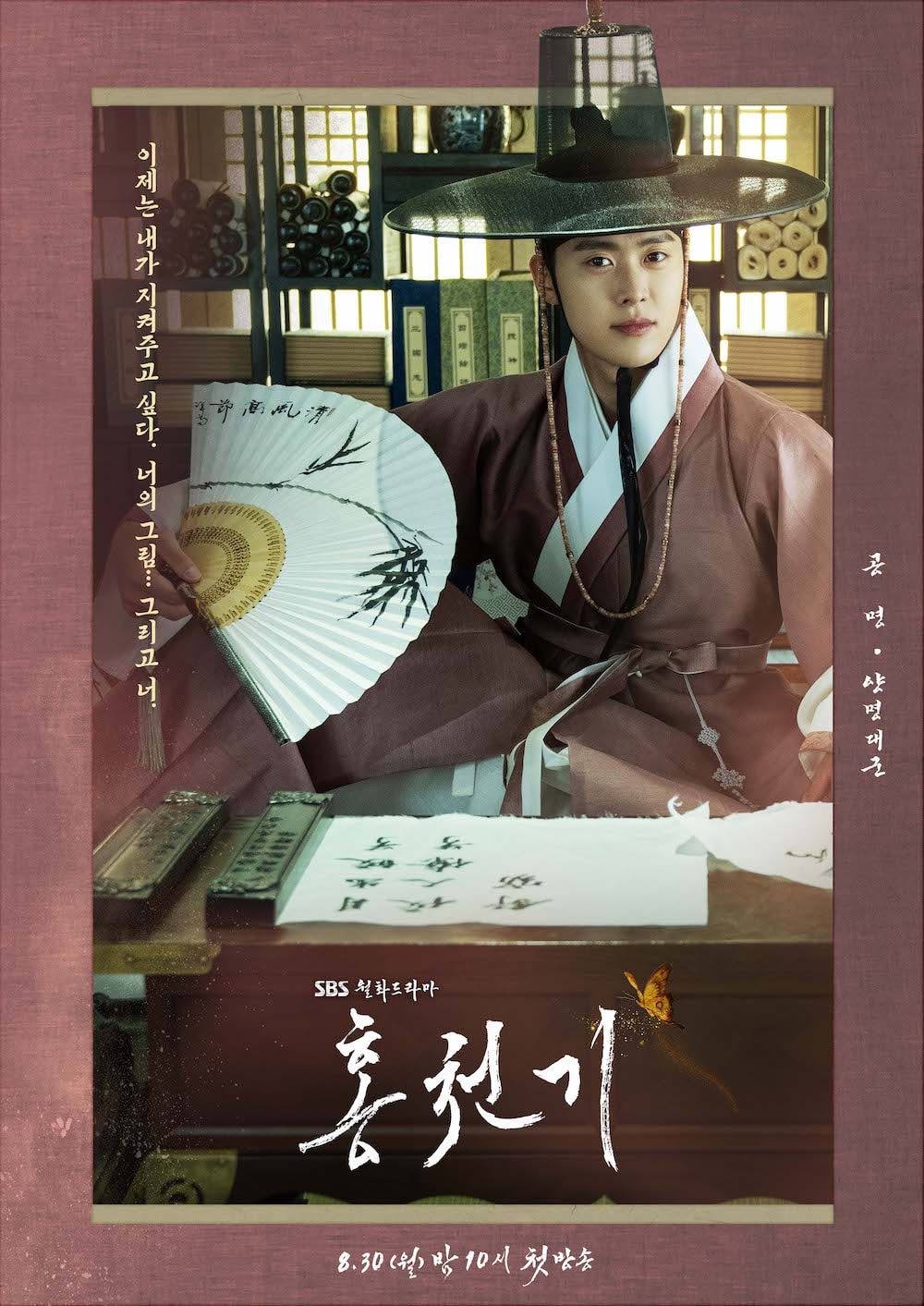 Kwak Si Yang takes on the role of the ambitious Prince Joohyang who dreams of taking over the throne. The throne and the red royal robe behind him indicate the position and status he deeply longs to achieve. His frightening conviction is further emphasized by his sharp gaze, the sword in his hand, and the text that reads, “Even if it’s determined by fate… I will take it away, for it has always been mine from the beginning!” 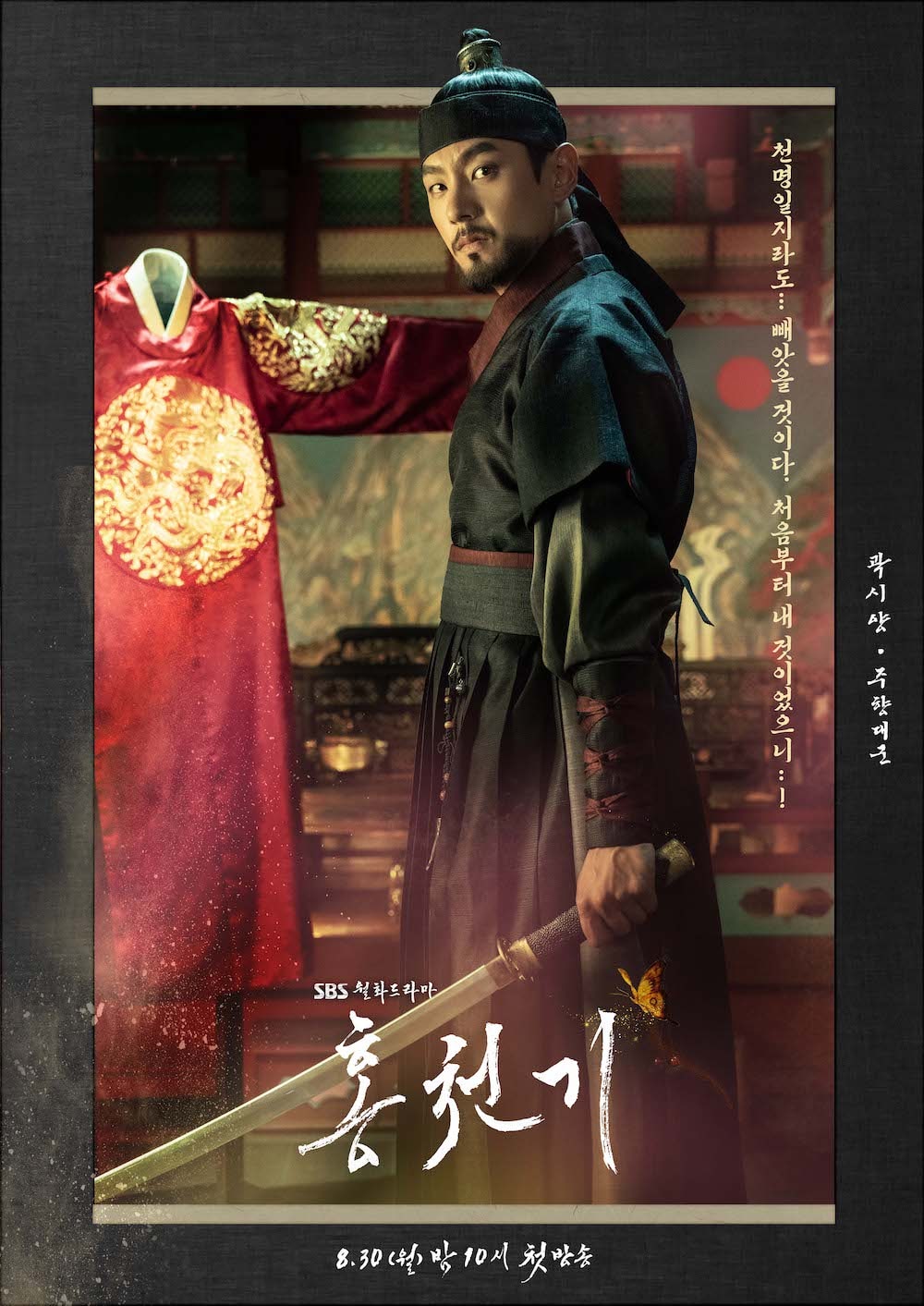 The individual posters preview each character’s defining characteristics and narratives. Tune in to the premiere of “Lovers of the Red Sky” to find out what kind of stories the characters will create together. The drama begins on August 30 and will be available on Viki.

Watch a teaser below!