Rehashed versions of a decades-old pick-up line, ‘Did it hurt? When you fell from heaven’, has now become the latest meme trend on Twitter. 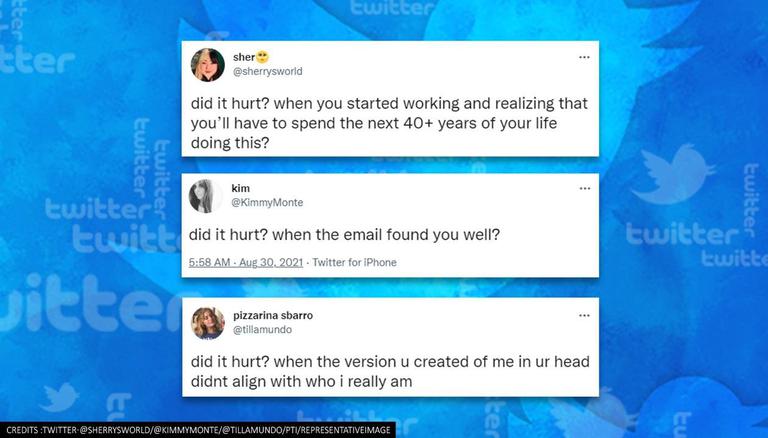 Rehashed versions of a decades-old pick-up line, ‘Did it hurt? When you fell from heaven’, has now become the latest meme trend. Twitter users started giving their own spin to the popular line and turned it into a much more accurate version – a line one could relate to. While the first part of the question –  “Did it hurt?” – was retained, the second part is changed by users, replacing “fall from heaven” with hilarious alternatives.

The memes on Twitter range from hilarious to cathartic. The latest internet trend has even been joined by several brands, including Instagram and Swiggy. While Instagram teased their users and said that a photo of an egg was the most liked picture on their platform, despite the users’ attempts to look the best for the posts. Swiggy, on the other hand, referred to the age-old question of whether pineapple is a legitimate pizza topping.

Did it hurt? When you realised pineapple on pizza actually tastes kinda nice?

did it hurt? when an egg got more likes than you?

did it hurt? when you got handed the player 2 controller

did it hurt? when you checked your phone but it was us, not her

did it hurt? when the version u created of me in ur head didnt align with who i really am

did it hurt? when you started working and realizing that you’ll have to spend the next 40+ years of your life doing this?

did it hurt? when august slipped away into a moment in time?

Did it hurt? When you saw yourself in the front facing camera

did it hurt? when you fell from the milk crates

Did it hurt? When Charlie bit you?

Get the latest entertainment news from India & around the world. Now follow your favourite television celebs and telly updates. Republic World is your one-stop destination for trending Bollywood news. Tune in today to stay updated with all the latest news and headlines from the world of entertainment.

Elijah Wood eyeing a part in a Marvel film: â€˜Itâ€™d be totally awesomeâ€™